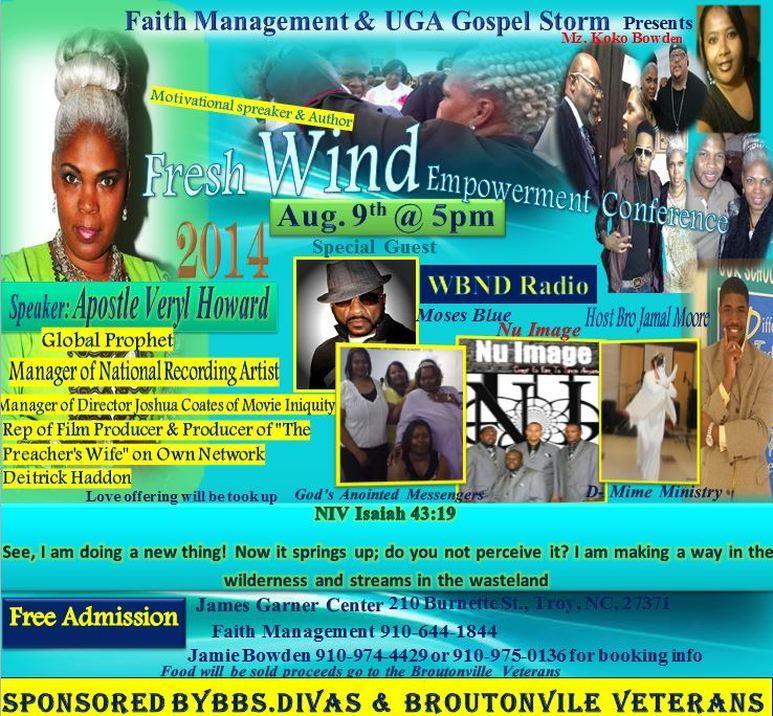 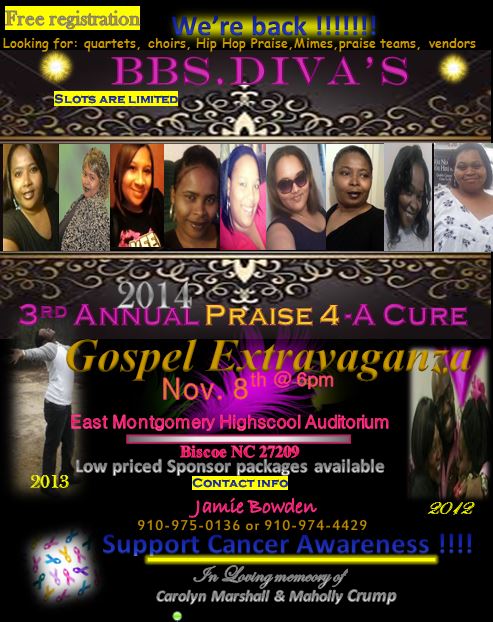 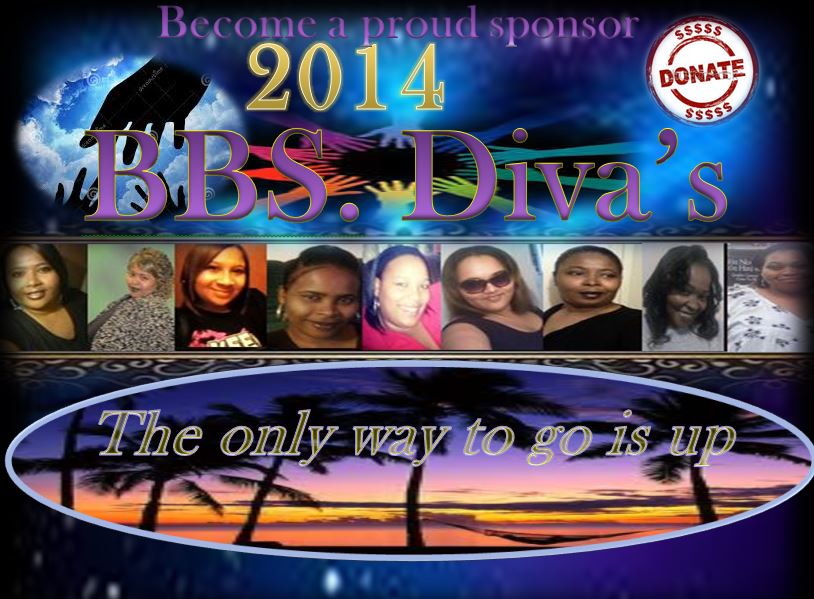 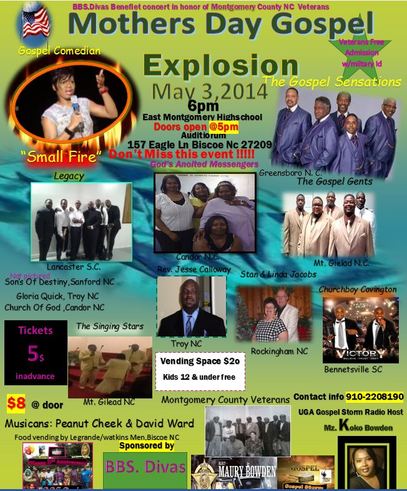 ATTN PUBILC Mother’s Day
Gospel Explosion Benefit Concert: You are invited to the 1st
Mother’s Day Gospel Explosion presented by the BBS.Divas of Candor, N.C. The
event will be free to all veterans with military I.D. & $5 in advance/ $8 @
the door, kids 12 & under are free. Please come out and help us celebrate @
East Montgomery Auditorium in Biscoe N.C on May 3, 2014 @ 6pm. Special guest
include: BET Comedian “Small Fire” of Jacksonville Florida, Featured Gospel
artist on The Bobby Jones Gospel Show “The Gospel Sensations” of Greensboro N.C,
God’s Anointed Messengers of Candor N.C., Legacy of Lancaster S.C., The Gospel
Gents of Mt. Gilead N.C., Sons of Destiny of Sanford N.C.. Partial proceeds go
to The Montgomery County Veterans of Candor, NC. Vending space is available for
$20 Contact info: Jamie Bowden 910-220-8190 or
910-220-0120 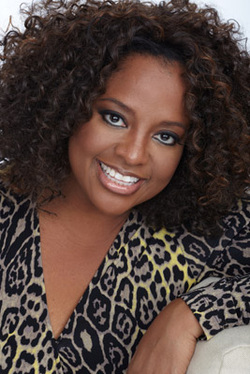 In August 2009, Sherri was a part of groundbreaking history when the hosts of The View won the Daytime Emmy for Outstanding Talk Show Host. That same year, Sherri and the co-hosts were chosen as part of the “100 Most Influential People in the World” by Time magazine while Forbesranked The View hosts #11 among the top “30 of the Most Influential Women in Media.”

In addition to daytime television,  Sherri just wrapped a recurring role for this upcoming final season of "How I Met Your Mother."  Sherri competed in the fourteenth season of ABC’s wildly popular, “Dancing with the Stars.” She continues to be a memorable player in prime time and frequently guest-starred on the Emmy award-winning series 30 Rock as Tracy Morgan’s wife, Angie Jordan. Sherri executive produced and starred in her own sitcom SHERRI on Lifetime and has made laugh out loud appearances in Less than Perfect, Everybody Loves Raymond, Joan of Arcadia, Suddenly Susan and The Jamie Foxx Show. She got rave reviews in the lead dramatic role of Joy White in the Lifetime movie "Abducted: the Carlina White Story,"  co-starred w Katherine Heigl in "One for the Mone," and co stars in Chris Rock's upcoming film "Finally Famous.".   Additionally, she has appeared in such feature films as the award-winning Precious based on the novel Pushby Sapphire, Madagascar: Escape 2 Africa, Guess Who, Who’s Your Caddy, Beauty Shop and Cellular.  Sherri also had a successful run in the critically acclaimed off-Broadway hit  "Love, Loss and What I Wore."

Going back to her roots in stand up, Sherri taped her first one hour comedy special "Sherri Shepherd: It's My Time to Talk", which premiered on the EPIX network June 21.

Sharing her passion for staying healthy, Sherri authored PLAN D: How to Lose Weight and Beat Diabetes Even If You Don’t Have It (Harper Collins) which debuted April 30 and hit #13 on the New York Times Best Seller List. She is also the author of a humorous autobiography, Permission Slips: Every Woman’s Guide to Giving Yourself a Break (Grand Central Publishing).

Knowing the heartache and joy of raising a child with special needs, Sherri has partnered with the YAI National Institute to raise awareness for children and adults with disabilities.

Taking her not so secret passion for wearing wigs, Sherri recently created a high fashion wig collection, “Luxhair Now by Sherri Shepherd™” which consists of 12 wigs in various lengths, from short pixies to long and luscious waves, and come in 18 colors.

Sherri has an eight-year-old son, Jeffrey, and recently married Lamar Sally. Their wedding was captured by The Style Network and “Wedding Fabulous: Sherri Shepherd Gets Married” garnered the highest ratings for a wedding special on the network.

They reside in New Jersey.
(This article is according to http://www.thestellarawards.com/host.html) 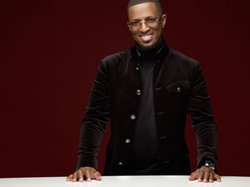 Establishing himself as a clean comic, his down home southern humor has made him a favorite in the nation’s top comedy venues. From intimate comedy clubs to sold out crowds at Madison Square Garden, the Universal Amphitheater and the Lincoln Center, Rickey’s unique style of humor resonates with his audiences unlike any other comic on the road today.

He has continued to please. In November of 2002, Rickey joined fellow heavyweight comedians D. L. Hughley, J. Anthony Brown, Bruce Bruce, Earthquake, and Sommore on the Latham Entertainment Presents Tour. This multi-city mega stadium tour, produced by Walter Latham of the Kings and Queens of Comedy, was a huge success. Walter Latham will be putting them back on tour in the fall of 2003 because of the demand of more comedy from the fans. Rickey also made his mark in the feature film arena, appearing in New Line Cinema’s ”Friday After Next”, which was released on November 22, 2002.

Best known as host of the 2000 season of BET’s ”ComicView”,Rickey led the show to its highest jump in ratings in the show’s ten-year history. BET then quickly signed Rickey to host “The Way We Do It” during the 2001-2002 season, and that show went on to become one of the top five shows on the network. It’s his genuine love of performing that has brought Rickey many accolades on stage, on camera and off. He was a guest presenter on the 2001 NAACP Image Awards and hosted the special awards banquet for the 2002 Stellar Gospel Music Awards. In his personal life, he finds time to devote to church, to charities, to the Big Brother Program and to family.

Smiley’s characters have become his comedic trademark. From Bernice and her church announcements to Coach McClainy and his lack of motivational skills, Rickey’s audiences can’t seem to get enough of him. Rickey is so convincing doing his character impersonations. He has released three comedy CDs. They are The Best of Comedian Rickey Smiley: Volume I, Rickey Smiley Prank Phone Calls Volume II, and Rickey Smiley: Volume III. These CDs are sold daily to several of his fans via phone and the Internet Volume IV and V will be released in late 2003 or early 2004.

One of the most diverse entertainers today, Rickey’s fan base covers a broad range – from the very young to the very old. Grandparents often show up at Rickey’s shows, knowing they will not be embarrassed by Rickey’s material. When Rickey headlines a large venue, it is not unusual to find parents bringing their children to watch Rickey perform. His style of comedy is recognizable, approachable, and best of all hilarious. He is inspired by the support of his fans on the road. He makes it a habit to personally greet his audiences as they are leaving the shows.

The top comedy club chains in the country consider Rickey a high commodity. The Improv, The Funny Bone, Zanies, The Comedy House Theatre, Carolines on Broadway and many other clubs list Rickey as one of their favorite comics to work with because of his “laid back” personality. It is this same personality that has led him to upcoming meetings with New Line Cinema to discuss making a feature film based on some of his characters such as Bernice Jenkins.
(Article written by http://www.103weup.com/page.php?page_id=73) 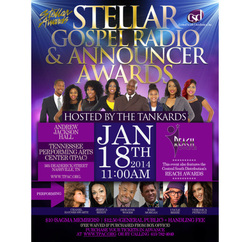 Some of the events that will be streamed live 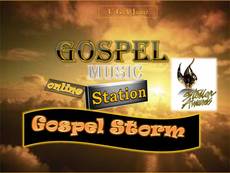 The BBS.Divas is a non-profit organization which stands for
Beautiful Blessed Sista’s. Our mission is to bring people together that share a
common cause and help restore value back to the community. Who can be a
BBS.Diva? Anyone who wishes to be rather you are online or offline. All we ask
is that you volunteer or donate to a specific cause throughout the year. It does
not cost anything to be a member. But we would love to have pictures to share
with others to show how God continues to bless the community. We welcome all to
join in and support your selected cause when you are able too. Don’t wait for it
to be you sick or homeless before you recognize the value of blessing others.